About Us – The History of HEAL

HEAL (Home of Expressive Arts and Learning) was established in 2004 as a school-based specialty mental health program supporting the wellbeing of young people from a refugee background at Brisbane’s Milpera State High School.

Music Therapy (MT) was offered at Milpera from 2003 and art therapy (AT) commenced in 2004 when ESL teacher and Creative Arts therapist, Jane Griffin, worked with whole class groups in various rooms in the school. In 2005, the two therapies joined to become the HEAL program.

Soon after, a building was donated by supporters OPD Developers, and individual AT as well as “Art for Relaxation” (initially with Susan Whiting), had a permanent home. This home was enhanced in 2009 when some money donated by Ceres Capital was used to build a beautiful Memory Garden which is used for memorial rituals and quiet walks by HEAL participants.

In 2011, after the January floods, our donated demountable was totally submerged along with much of Milpera. The HEAL building was totally renovated, emerging shining and new!

Since HEAL began, we have been involved in sharing our knowledge through training, offering student practicum for Music Therapy and Art Therapy (UQ), Creative Art Therapy (MIECAT), and Psychology and Social Work (QUT).

The Friends of HEAL Foundation (fHEAL) was established in 2012 in response to the need to find sustainable funding for the work of HEAL.  A group of sixteen people met at the home of HEAL Coordinator, Jane Griffin, including HEAL staff, Milpera staff, past HEAL participants, a present Milpera student and family, a Social Work Masters student, and friends of HEAL.

The Friends of HEAL Foundation’s mission was to,

“Provide relief from distress, and improve mental health through providing Creative Arts Therapy to adolescent refugees in schools. To improve well-being, increase possibilities for social inclusion and good settlement, and increase potential to learn and live well and happily.”

Through HEAL’s therapy programs, thousands of students from diverse cultural backgrounds across five Brisbane high schools have been supported to heal and discover a new sense of self. 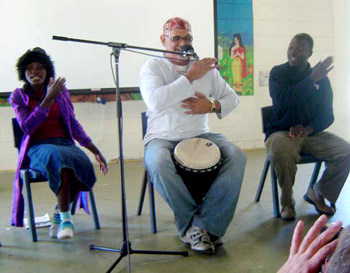 In 2014, HEAL’s founder and CEO Jane Griffin was awarded the Positive Teacher of the Year award by the National Australian Positive Schools Initiative.

In 2015, the Friends of HEAL Foundation was awarded the Community Meritorious Award by the United Nations Association of Australia in Queensland while fHEAL’s Chair Adele Rice was recognised with an individual UN award for service to the refugee sector.

In 2016, the Friends of HEAL Foundation received the Services and Organisations Award at the Multicultural Queensland Awards which recognise individuals and organisations that support and promote a united, harmonious and inclusive Queensland community.

In 2021, the Friends of HEAL Foundation joined with QPASTT (Queensland Program of Assistance to Survivors of Torture and Trauma).

Founded in 1995, QPASTT provides specialised, culturally responsive services to promote the health and wellbeing of people in Australia who have sought safety from persecution, torture and war related trauma.

Founded in 1995, QPASTT is a non-government, not-for-profit organisation with no political or religious affiliations providing culturally responsive services to promote the health and wellbeing of people in Australia who have sought safety from persecution, torture and war related trauma.

QPASTT is a member of the Forum of Australian Services for Survivors of Torture and Trauma (FASSTT), a network of eight specialist rehabilitation agencies that respond to the needs of survivors of torture and trauma who have come to Australia from overseas. There is a FASSTT member agency in each state and territory in Australia.

QPASTT is a member of the International Rehabilitation Council for Torture Victims (IRCT), a global membership fighting to eradicate torture and offer health-based rehabilitation services to help torture victims rebuild their lives. Find out more.